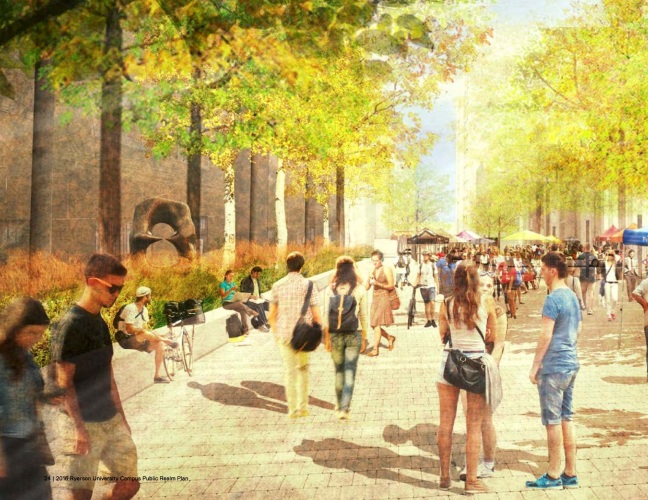 One of my favourite little islands of quiet green space in downtown Toronto is a hidden grassy field a one-minute brisk walk away from Yonge-Dundas Square. It’s one of those unique moments where you can be right in the thick of thousands of people with video screens screaming ads at you and then quickly melt away into a quiet park surrounded by sleepy classroom buildings and a big open patch of green. This is the aptly named Ryerson Community Park.

Ryerson’s campus plugs right into the heart of downtown in a way that the University of Toronto—my former campus—doesn’t. It’s streets, green spaces, laneways, sidewalks, and plazas form a network that seamlessly connects into the pulsing city around it. 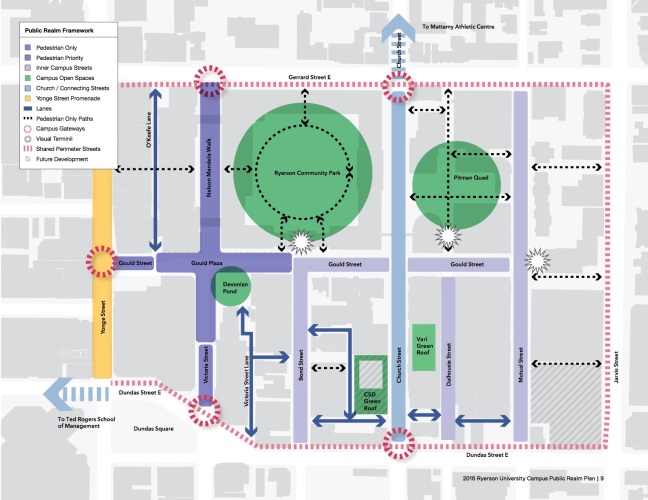 That’s why we should pay attention when Ryerson proposes a new public space master plan that aims to transform its public space network, including streets, into something that is safer, people-focused, and accessible. It’s not just a redesign that will benefit students, but residents and visitors to downtown. And, if it’s done right, it could act as an important example of what’s possible in other neighbourhoods.

At the heart of the master plan, and of the campus itself, is Gould Plaza—one of the City of Toronto’s largest experiments (the largest?) in repurposing road space as public space for people. Closed to traffic as a temporary pilot in 2011, the open space on Gould Street quickly became a magnet for people and activity.

The plan proposes a simple, but important design fix to make the plaza permanent: raising the surface up so it’s flush with the sidewalks around it. Even though the street is closed to all traffic, pedestrians still, out of force of habit perhaps, use the sidewalks that line its edges.

If completed, this would mirror the high-profile pedestrianization of New York’s Times Square, where a similar pilot project to create space for people was made permanent by raising the pavement. It’s amazing what a small change in grade and materials can do for a space to make it more comfortable and inviting–not to mention accessible. Goodbye, curbs!

Also included in the plan, are ideas to make the laneways on campus—Victoria and O’Keefe—more inviting and usable for people by including lighting and art features. The plan doesn’t go too deeply into what’s possible in each of these laneways, which is a disappointment, but they could really be used as a template for other laneways downtown if we do them right. I know the City of Toronto and the Downtown Yonge BIA have been actively working on how to transform these laneways for quite some time, so hopefully we’ll see some of that move forward.

Finally, the plan proposes creating pedestrian-priority streets on other key streets leading into the campus. While these will still allow car travel, they will be raised up and treated with different paving, signalling to cars that they’ve entered a pedestrian-priority space. This treatment of streets to make them safer and more pleasant for people is a useful lesson beyond the campus that could be implemented in other neighbourhoods. In fact, it’s used at some intersections already in the University of Toronto campus along Huron Street.

I hope the University steps up with the necessary funding to make these improvements a reality because, if implemented, they could lead the way in Toronto to re-imagining the potential of our streets not as simply places to move cars, but places for people.