I lived in Vancouver’s West End for three years just a few blocks from Davie Street, which runs through the centre of the city’s gay village. While the street was billed as the “heart” of the village, it was more like an artery in search of a heart.

There was nowhere along the strip to hang out, chat with people, host community events and watch the bustle of the street. There was nearby Nelson Park, which got a nice facelift during my time there, but what the street lacked–and what many neighbourhoods in Vancouver lack–was a public space or plaza that acted as a central gathering spot right on the street.

A few years ago the City decided to change that. The result, the newly opened Jim Deva Plaza, is a great example of both why pilot projects matter and why programming is so important to public spaces. 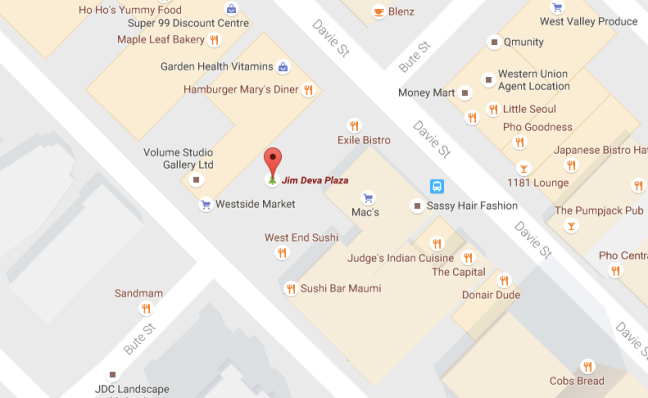 The City opened up a portion of a Bute Street, which intersects with Davie, by removing car access and creating a quick and cheap public space to test the idea. Tables and chairs were put out, and small community events, like games nights, were encouraged.

The pilot was so successful that when the City surveyed the community about whether they wanted to make the plaza permanent, over 80% said yes.

This September I went back to Vancouver to attend Placemaking Week, and got to check out the now permanent Jim Deva Plaza, named after a local community activist around gay rights and free speech who died tragically a few years ago in an accident. The giant megaphone structure seen in the title picture acts both as a statement about Deva’s advocacy and provides a place for people to perform.

Don’t just provide a space, provide something for people to do

The plaza seems to be working as a spot to mix and mingle. On a somewhat cool, but sunny day I sat in the plaza on one of the moveable chairs left out for people. A man with a guitar sang songs and intermittently chatted with a woman from Australia who sat nearby. A group of skateboarders stopped to play over-sized Jenga, which turned into a huge magnet for people walking by. I counted 12 people stopping to watch and talk to the guys in 10 minutes, including lots of older adults. 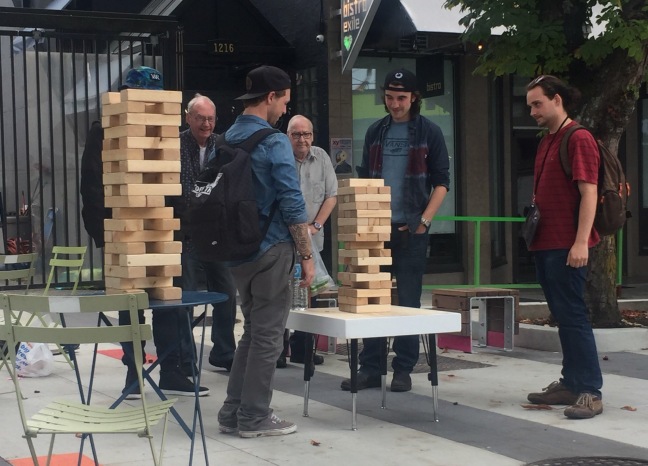 Successful public plazas are ones that provide opportunities for people to do things. Whether that’s play guitar, sit with friends, or interact in some low-key game. Too often we simply provide the space and then walk away thinking that’s the end of it. But it’s the activities in these spaces that really draw people, keep them there, and provide an opportunity to chat with people they don’t know and may not have interacted with otherwise.

When the Jenga blocks finally fell over, there were smiles from everyone in the plaza, and then they started all over again.

all photos are mine except the pre-designed space, which is from the Vancouver Courier