Toronto is a tower city. We not only have high-rises in our downtown core, but many clusters outside the core in the inner suburban areas. These tower clusters, often set within large open green spaces and parking lots, have become the landing pad for many newcomers to the city.

One of the challenges that has emerged, however, is a sense of disconnection in many of these tower neighbourhoods—from the city around them and from the green spaces, like the ravine system, which often lie tantalizingly close by without really great direct access. You also often have thousands of residents living in these towers, but without any real services or retail nearby where people can do simple things, like walk to get groceries.

Using a citizen-led process, a new report out by the Toronto Centre for Active Transportation takes a look at these challenges in Thorncliffe Park and Flemingdon Park—two of Toronto’s tower neighbourhoods—to highlight several key interventions that could make the neighbourhood a better place for residents with safer, more attractive routes for walking and cycling. 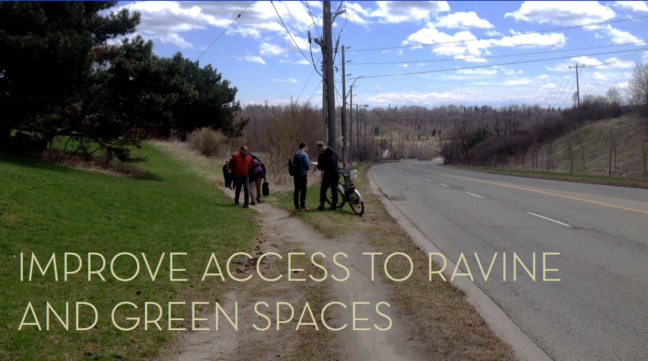 One idea focuses on making the nearby Don ravine, with its large, natural areas and wonderful trail, more accessible to residents. The idea is to create a “ravine landing pad” that would act as a welcoming gateway at the trailhead into the ravine, providing a place for people to gather, as well as informational signage.

Toronto’s ravines are truly magical and thread their way all across the city adjacent to many different kinds of neighbourhoods. But they’re often hidden. Sometimes a trail opening doesn’t include even a sign, let alone a map that shows you where the trail goes. Adding these elements woud go a long way to making the system more accessible.

The neighbourhood plan also recommends ways to active the in-between spaces in the neighbourhood through temporary activations on some of the parking lots. These could take the form of pop-up markets or retail stands. While residents didn’t support permanent retail, there was interest in temporary markets that could be set up.

This recommendation follows on the heels of City Council approving a new type of zoning for these neighbourhoods called Residential Apartment Commercial that allows retail and commercial uses to mix in with what are now just residential towers.

It would be great to see more of this citizen-led neighbourhood planning in more communities around Toronto.