I spent much of 2015 gallivanting around Toronto and looking at various parks as part of my goal to visit a park I hadn’t been to in every corner of Toronto as a way to explore the city. In the end, I saw over 80 parks in every ward of Toronto, from small parkettes to community gardens to sprawling ravines.

I decided that a good way to end the year was to look toward a future park–a space that hasn’t been created yet, but is slated for a major reimagining that has caused both excitement and raised eyebrows around Toronto: the Under Gardiner.

Set to open in 2017, the Under Gardiner will connect multiple communities together by repurposing leftover space underneath an elevated expressway in Toronto’s downtown core, transforming it into a 1.75km programmable public space.

For my walk, I met local Councillor Joe Cressy and urban designer Ken Greenberg, who is intimately involved with the project, at the Under Gardiner’s eastern start by Spadina.

Here the space is at its most unattractive currently. The Gardiner is obviously in need of repair (work that is in progress) and the ground is muddy and strewn with garbage. But its potential as a linear trail is plain to see as you stare down the telescoped length of the thing. 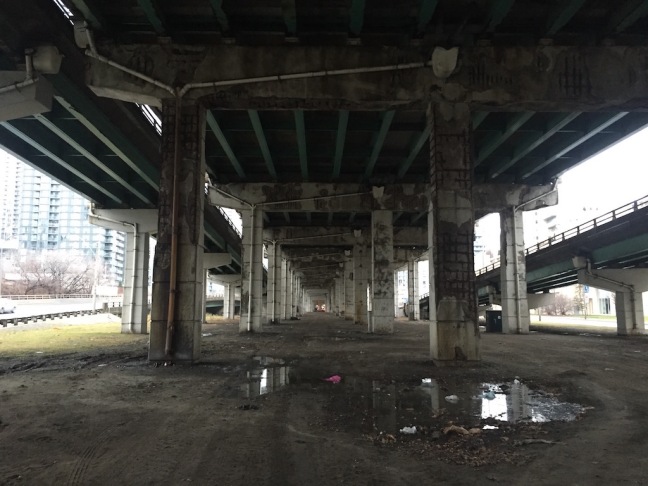 It’s also right smack against some incredibly dense and growing neighbourhoods. These neighbourhoods (CityPlace, Liberty Village, Fort York) are not actually that far apart from each other, but because of the Gardiner, the rail corridor, and some busy roads, feel worlds away. Tying them together with this trail is a way to plug these neighbourhoods better into each other and the rest of the city–something both Joe and Ken spoke about with excitement.

As we walked west, the aesthetics improved drastically. The Gardiner pulls itself up in height, causing the traffic noise to recede and the area to become brighter and cleaner.

The most surprising thing about the walk was how new condo developments that have sprouted up around the Gardiner have already begun to reclaim the space underneath. They’ve added paint, light features, bicycle parking, and in one case, a giant boulder. Some have lobby areas that open directly onto the space.

The city is already growing in around the expressway, almost absorbing it like those trees you see that have grown up and through a nearby chainlink fence.

And more of this is slated to happen in the next few years. Here’s a Loblaws redevelopment in progress right now that will create a new link under the Gardiner just to the east of Bathurst.

Part of the challenge of the Under Gardiner is connections–not just to the surrounding neighbourhoods and the many parks and public spaces nearby, but along its own length.

Here, as the Gardiner marches over Fort York Boulevard, Ken spoke of a pedestrian bridge that could hang suspended from the Gardiner, to allow cyclists and pedestrians to continue along the length of the Under Gardiner without having to cross this busy roadway.

As we got to the western section of the Under Gardiner near the Fort York Visitor’s Centre and the large, open green spaces that exist around it, the work that the City is doing on the roadway was obvious in the shower of sparks coming down.

This is where the Gardiner is at its highest point and the effect is pretty dramatic–a big soaring roof built overhead. The Visitor’s Centre, a wonderful building that opened not long ago, opens itself up under this section of the Gardiner and long imagined this stretch as a public space. 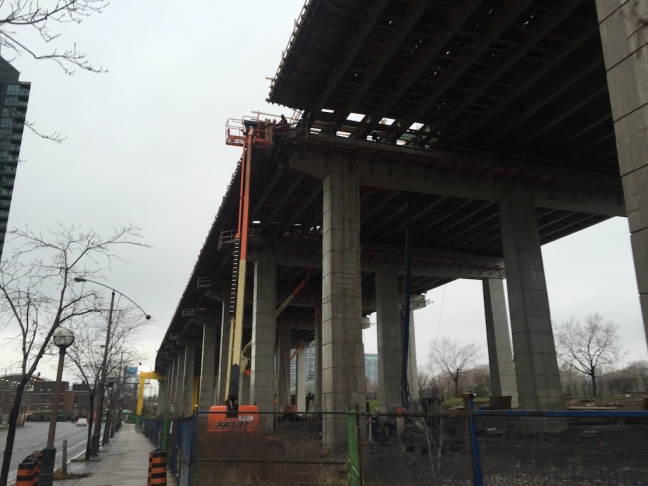 I know some are skeptical about this project with concerns ranging from air pollution, to noise, to it just being a “gross” space, but a visit to the actual area quickly dispels a lot of those. Air quality testing will be done, which is good. And the traffic noise is really only noticeable in the east section by Spadina. I’ve been to parks in Toronto that are far more noisy from busy roadways nearby.

I think a city that is maturing as it grows is one that begins to look deep within itself to locate spaces previously discarded as useless to find the useful things about them.

You see this in Vancouver, Montreal, New York, San Francisco, Boston, Chicago, and many other North American cities that are finding creative ways to layer uses, create flexible spaces, or repurposes forgotten areas as public space–whether this is parks in alleyways, along old rail lines, under elevated roads, on top of roads…the list is endless.

It’s an exciting time for public space in cities and I hope the Under Gardiner sparks a conversation about where some of these opportunities might exist in other areas of the city.

You can visit the Under Gardiner project website here.