As a Canadian living in Toronto, it’s kind of a shame to admit that I have never played hockey nor do I particularly enjoy ice skating (please see here for my reintroduction to ice skating earlier this year.)

But I got up early this past Saturday morning to head to Fairmount Park in Ward 32 to help a group of incredibly dedicated and fun guys called the Ice Masters build the boards for a natural ice rink in the park.

While there are a number of communities that band together in Toronto to create natural ice rinks in their parks each winter, the one at Fairmount Park is one of the oldest that is still going. And it’s going strong.

To help create the rinks, the City provides some training and you need to fill out a form. But there’s no cost and no insurance, which makes it easier for volunteer groups to take on the task of creating and maintaining the rinks. You can find out more here.

I was surprised to see about 15 guys up bright and early assembling the boards that will eventually (if we ever do get a winter this year) encircle a smooth sheet of ice. Ice they create by flooding the rink, sometimes late at night or early in the morning while you and me are in our jammies curled up with a coffee or whiskey (or both, let’s be honest.) 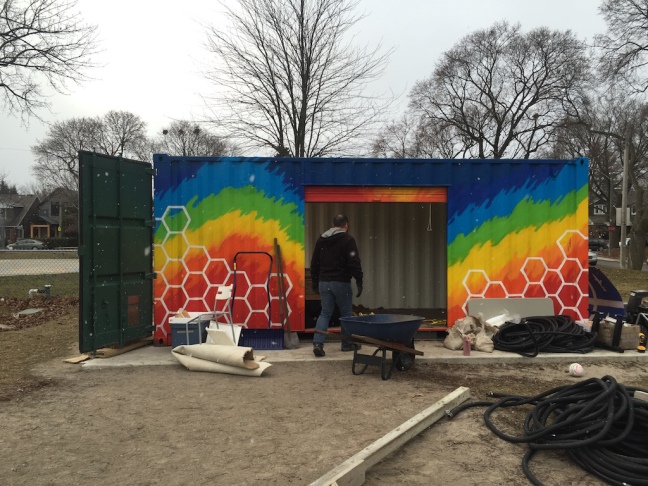 Mark, one of the ice masters, invited me to come to the rink building. He was a friendly guy in a Santa hat who pointed me toward a small brightly coloured shed in the park where the rink boards are stored. I got to work and tried to be useful, hauling wooden boards and plywood sheets out to the park where everyone was arranging them in an oval.

It started to snow, but because we were constantly moving around it never felt too cold. The amount of work it takes to not only set up the rink, but keep it going is impressive. I was only there for an hour that morning to hold boards while another guy drilled them together, but these guys will be out all winter making sure the ice is tended to.

Mark said they have a Winter Fest each year in February, so that’s something to look out for. You can follow the Ice Masters on Twitter here for updates.

And here’s a time-lapse that Mark put together. I’m not in the picture at the end, because I had to take off before it was all finished. It makes it all seem so quick and easy…