When you walk for 13 kilometres over 3.5 hours and visit 17 parks with a City Councillor, you learn a lot (you also get really, really hungry.)

Over the last 11 months I’ve been visiting parks in each ward of the city. I’ve seen about 70 parks in 39 wards (five wards left!), but until Councillor Gord Perks from Ward 14 offered to take me on a tour of parks in his ward, I hadn’t tried to cover all the parks in one ward. It seemed like a fun idea. I wore comfortable shoes.

After our first park walk day was rained out, I met Gord in Baird Park near the Junction. I was in the middle of reading an interpretive plaque, when Gord strode up and handed me a map he had printed off of the ward. We were going to start at the top and work our way down.

The shape of Ward 14 is an interesting one. Along with Ward 18, which is its mirror-opposite in shape, it looks like a pane of glass broken on a diagonal. We started up in the narrow tip of the ward, but made our way down towards the lake and then criss-crossed through Parkdale for a bit.

Here are five of my favourite bits and pieces from the walk: 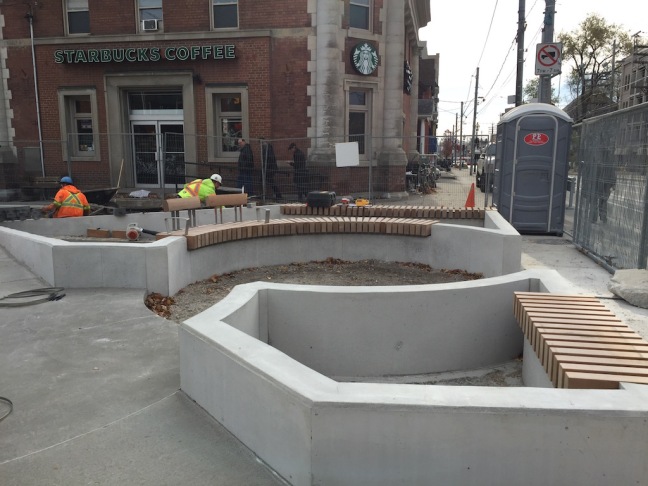 Whenever I walk down Roncesvalles (one of my favourite streets in Toronto), I always saw the triangular piece of land outside the Starbucks at the top of the street where it meets Dundas West as a lost opportunity. So I was happy to see construction work well underway to create a new garden and seating area. Gord said funding came from the War of 1812 fund and the space will be a “peace” garden. Some inventive funding for what looks like will be a nifty new public space.

Then there was this little plaza space created on TTC property where local residents come help take care of the plants. A good place to watch the trains.

The town square that community built

Sorauren Park is an all-around great park and hosts things like the amazing annual pumpkin parade to which I have—and I can’t believe I have to admit this—never actually attended. But one of the cool things in the park recently is the creation of a Town Square, which now hosts events like the regular farmer’s market. The building in the far background is an old factory that is on the books to be converted to a new community centre. A very active community group, the Wabash Building Society, has been a key part of these new spaces.

What may be Toronto’s smallest community garden

There were a lot of itty bitty parks in Ward 14, but Melbourne Avenue Parkette was probably the smallest. It’s a skinny, deep park and right at its back is what I’m sure has to be the smallest and cutest community garden in the entire city. I’m not sure what the official numbers are, but it seems to me that Ward 14 has probably the most community gardens out of any ward in the city. Almost every park we went to had some garden space. 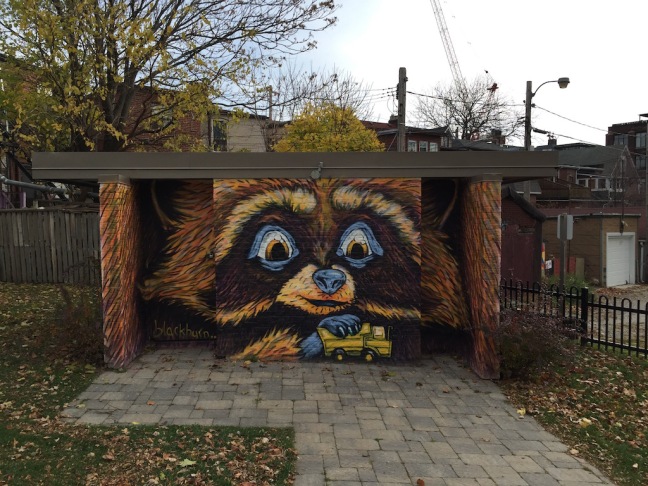 My favourite park we visited was easily Columbus Parkette—a space I had biked past several times but never really given a look. This park is surrounded by garages on three sides and several years ago Gord pulled together a bunch of street artists as part of the city’s graffiti abatement program to paint murals on the garages that face the park in a bid to beautify the space and make it feel safer. The result is a wonderful collage of different styles that really brightens up the park. My favourite was definitely this wolf:

A park that joins a high and low-income area

We often talk about parks in the city as being the public spaces where everyone in the city can mix and mingle. Spencer-Cowan Parkette is a good example of that. A sliver of green space that connects two streets together—Cowan and Spencer Avenues—this park acts as a kind of joint connecting the wealthier residents of Cowan in their houses on the west side to those living in mid-rise low-income apartment buildings and co-ops on the east side. 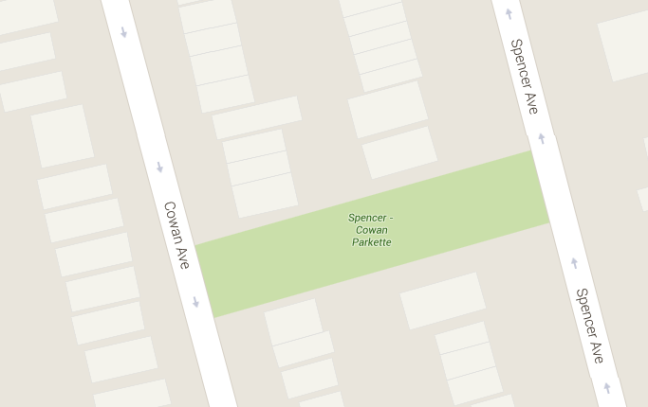 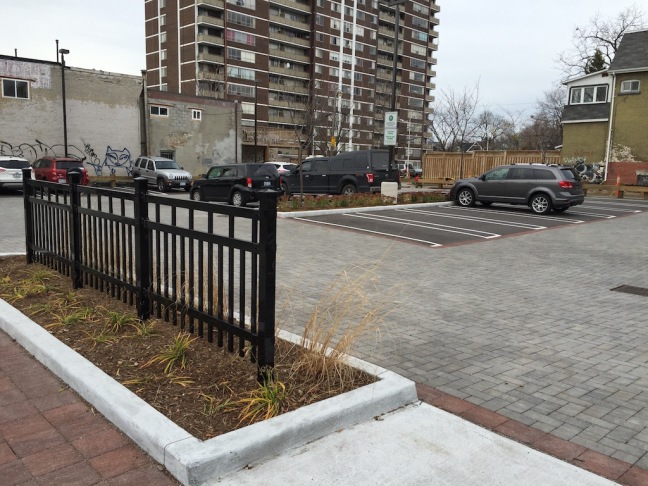 OK, so this is a parking lot, not a park, but hear me out. Considering how much space we still devote to paved surface parking lots in Toronto, the idea behind this one is important. Gardens and landscaping around its edges introduced more green into the neighbourhood and the permeable paving allows stormwater to infiltrate into the ground rather than run off into a stormwater sewer drain somewhere. If more of our Green P’s were actually this green it would be fantastic.

Thanks so much to Councillor Perks for taking the time to show me around the ward.