It was one of those beautiful Fall days near the end of September where summer seems to be hanging on by its finger nails that I decided to finally bike the Scarborough butterfly trail that threads its way through part of the Gatineau hydro corridor.

I’d wanted to check it out for some time, seeing as it was one of the big projects funded in 2013 under the Weston Family Parks Challenge, the grant program that Park People administers. But, well, it’s a bit of a bike from where I live.

There were a few ways I could go, some a bit more scenic than others, but I decided to choose the most direct route, since my ride was already going to be 1.5 hours one way. I biked through parts of East York and then entered the hydro corridor where the trail starts at Victoria Park.

The Toronto and Region Conservation Authority (TRCA) is the organization that led the creation of the butterfly trail, working in partnership with the City of Toronto who licenses the land in the hydro corridor for recreational trails. The butterfly trail consists of a naturalized native wildflower meadow along a 3.5km stretch of hydro corridor trail, where normally there would just be mowed grass, that runs from McCowan Road to Scarborough Golf Club Road.

But even without the butterfly meadow, the trail is well worth a visit. It’s not often that I can hop on my bike in Toronto and zip around off-road for kilometre after kilometre, but that’s exactly what you can do in the hydro corridor. Aside from one stretch where the trail diverts to residential streets, the entire trail is separated from the street. 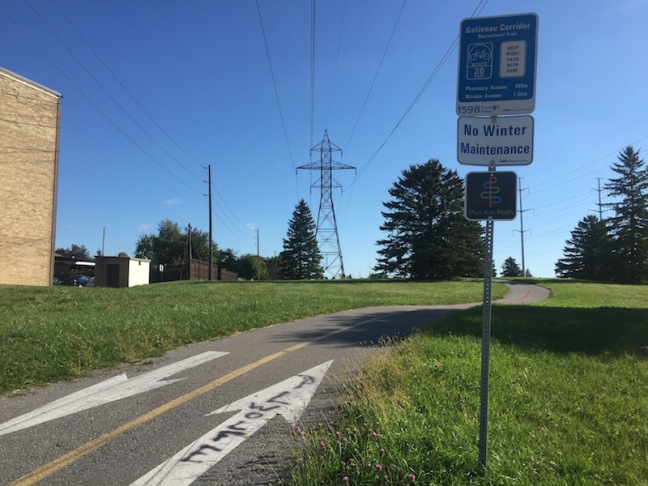 Where the trail crosses major roads there’s even a nice bike light for you and where there are minor roads the City has paved the crossings in brick which helps alert cars that this is more of a shared space. It’s a nice touch. Wish this was found in more places in Toronto.

The butterfly meadow, however, makes a huge difference. I found myself biking slower without even realizing it. The smell in the air changed to be somewhat sweeter. The sounds also changed. Far more buzzing. I saw a few butterflies, but more bees lazily floating around.

I also saw people. Far more people than I saw in any other section of the trail, and it’s not hard to figure out why. Walking along a path that snakes its way through mowed grass is not exactly the most pleasant or interesting experience. It’s fine to bike, but, I imagine, kind of boring to walk. Case in point:

Not so with the butterfly trail. I saw people jogging, walking their dog, or just out for a stroll. The meadow makes the huge expanse of the hydro corridor feel more intimate, and there’s always something to look at as well.

It just makes so much sense to create these native wildflower meadows in our hydro corridors. Better for nature and biodiversity, but also better for people.