Tropical Paradise, the sign promised as I stood in ankle deep snow on the side of a road in Etobicoke. It was Sunday and amidst extreme cold weather alerts and warnings of freezing rain, I had decided I wanted to read in a park.

Usually I head to Allan Gardens, a park in the east side of downtown with a beautiful, historic conservatory–one of the oldest in North America in fact. It may smell a bit pungent and small drops of condensation may drip on your head but it’s one of the only places to go and get a dose of green in the middle of a long winter.

The other is located about an hours transit ride west to the farthest reaches of Etobicoke in Centennial Park in Ward 3. The conservatory there is helped out by the volunteer-based Friends of Centennial Park Conservatory, which raise money for improvements through events. It’s free and open 7 days a week 365 days a year from 10am to 5pm (more here).

After an unexpected 25-minute wait at Royal York Station because Google sucks at bus schedules, I boarded the 48 Rathbury which lets you off right at the bottom of a short road that leads up into the park to the conservatory building.

About 50 children and their parents, bundled up like colourful marshmallows, were sledding on a small hill at the base of the park in stark defiance of the Toronto Star commenter who claimed that “most nature loving people in burbs tend to emerge in the warmer months.” Parks are often stunningly beautiful in the winter, and besides that there is sledding, skating parties, hot chocolate, and campfires. One thing I’ve learned about living in Toronto is that you have to get outside in the winter, even when it’s freezing, otherwise you go nuts. 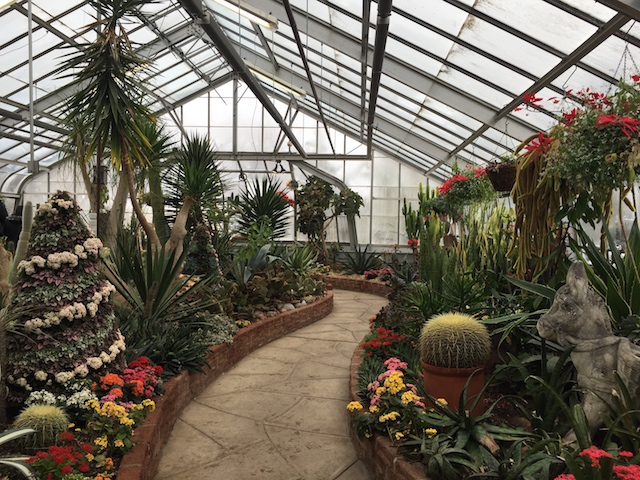 But sometimes inside is more inviting. And the conservatory building looked very welcoming with the glimpses of green through its fogged up windows. There are two smaller sections branching off from a larger, central space where trees and tropical plants soar up to the high ceilings. I loved the arid house where all manner of funny looking cacti live, but sadly there were no benches in this section. A sign imploring visitors to leave their signatures in the visitor’s book was set up next to a meaty looking succulent with broad fronds that I suppose at some point a few dumb people had decided was a good surface on which to leave their autographs. Don’t tag the plants, people.

The conservatory was pretty quiet, which was nice. Quiet, that is, except for Angel, the conservatory’s resident cockatiel. Angel lives in a cage in the central building, but is let out each morning from 7am to 10am to explore. He stared out at me with a flat, glassy black eye, fanning his yellow-tinged white feathers below him. A sign posted nearby said that if you sang “Twinkle, Twinkle, Little Star” he will dance. I whisper-sang it to him, but he just looked at me unimpressed.

People drifted around the building, many with large cameras around their necks. A man set up a tripod next to me and took a bunch of pictures of a lovely white flower. There is a small pond where orange fish swim around. A young couple took a few selfies. A small boy spit at the fish.

I found a nice bench to sit on and cracked my book. Two teenagers kept walking by, whispering, and ducking into the washroom before drifting back out into the arid house. No diss to the conservatory, but it doesn’t really seem like the kind of place that many teenage boys would find interesting. Then I went to the washroom and discovered bits of ash on the ground and a whiff of smoke. Ah, got it.

The conservatory: something for everyone on a cold winter day.

This post is part of the City within a Park series where I’m visiting a park I haven’t been to in every one of Toronto’s 44 wards in 2015. (Also, sorry if you see ads here. I can’t control it.)