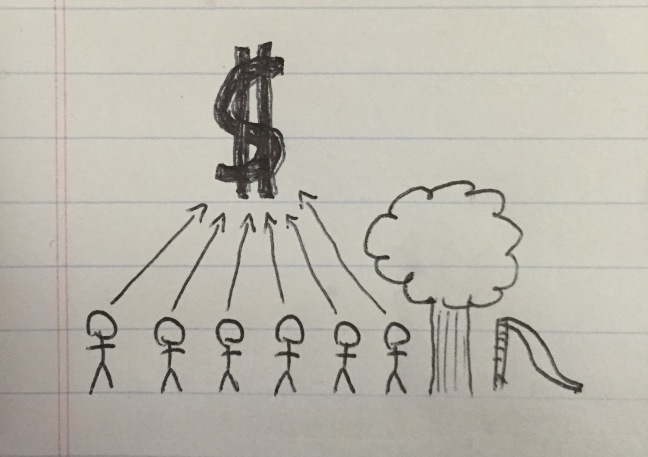 An article yesterday in Next City explored the growing trend of using crowdfunding tools to raise money for public park and open space projects. Crowdfunded parks are coming and that isn’t a bad thing, the article says. Examples were given where money was crowdfunded for new projects entirely or for publicly funded projects that need a little bit of extra money to top them up.

Here’s one for a cycling connection proposed in Memphis:

“The Hampline is being built largely with federal, state and city grants, but when a $75,000 budget hole cropped up in 2013, community leaders decided not to wait for more grant dollars from Washington and instead, turn to a new source of funding: the crowd.”

But turning to the ‘crowd’ is not a new source of funding–not really. The original crowdfunding is, of course, taxes.

But the other side of the story is that, for many cities, cuts to park budgets have put a strain on many parks departments, no doubt helping to create this environment where citizens and groups feel they need to step in themselves when funding gaps arise.

And not every community will be able to marshal the same private fundraising to fill gaps in local projects or to bring neat parks to their communities. The article notes that 1 in 5 civic crowdfunding projects mentioned benefits for underserved communities, but that “overall the majority of projects in the civic crowdfunding space are not coming from those communities.”

Perhaps, as former NYC Parks Commissioner Adrian Benepe argues in the article, private fundraising for projects frees up public money to be spent elsewhere, like in underserved communities. It would make an interesting study.

In fact, some places are making progress on this. Seattle just voted to create a park tax district that will help fund park improvements and maintenance for years to come. A suburb in Denver also recently voted for a tax increase for parks. It can happen.