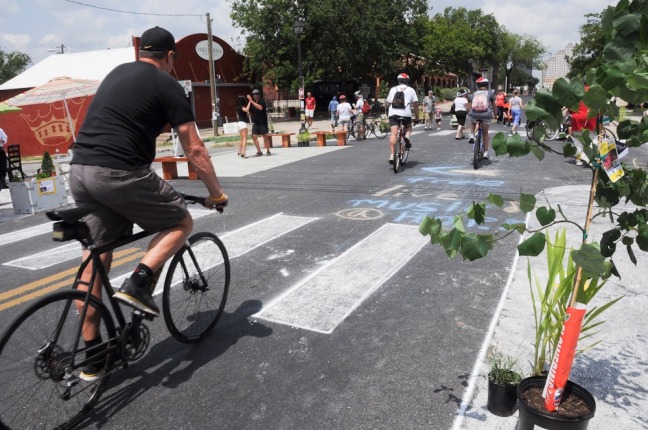 I’m so excited to see that Open Streets Toronto, which proposes opening up a stretch of Bloor Street for four Sundays this summer to people rather than cars between High Park and Withrow Park, is gaining momentum.

We don’t often think of them this way, what with all the vehicles rumbling along them 24/7, but the streets of our cities are our largest public spaces.

In Toronto, for example, there are 5,617 kilometres of roadways comprising 27.4 percent of the city’s area. To put that in perspective, parks and open spaces cover just about 13 percent of Toronto.

So it’s not surprising that in dense cities where new land for parks is difficult to come by, people are looking at streets that can be permanently or temporarily opened up to people to create new open spaces and pop-up parks. These not only get people outside, they allow people to experience their city in new ways and help connect neighbourhoods.

There is probably a health argument here somewhere, but forget about that eat-your-greens stuff for a moment. What about a fun argument? Shouldn’t we be allowed to play in the street for four Sundays in the summer?

No, say some people. Streets are for cars, trucks and busses. It will cause gridlock, chaos, anarchy.

There are 2,232 hours in summer where Bloor Street is open for cars (okay, okay there are some other smaller street closures for festivals, I’m spit-balling here). Open Streets Toronto is proposing to use 20 of those hours (five hours on four different Sundays) for people only. That’s a pretty small percentage of hours that cars won’t be able to travel east-west this summer.

If this was a pie chart, this slice of time would be so thin as to be almost invisible. Here, look:

North American cities from Austin to New York City to Vancouver have already experimented with opening up stretches of roadway in the summer in similar programs to Open Streets Toronto. So far their economies are doing okay, fingers-crossed.

I was in New York City a few summers ago and stumbled upon Summer Streets, which opened up portions of roadway in Manhattan to people. I borrowed a free bike and zoomed up towards Central Park with thousands of others. I passed people doing yoga, taking dance lessons, or just walking around.

Everyone was giddy about the fact that they were in the middle of Park Avenue. For a few hours on a sunny summer day, the street lived up to its name.